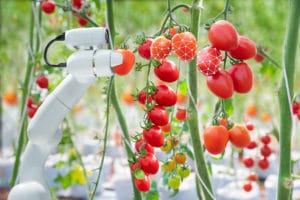 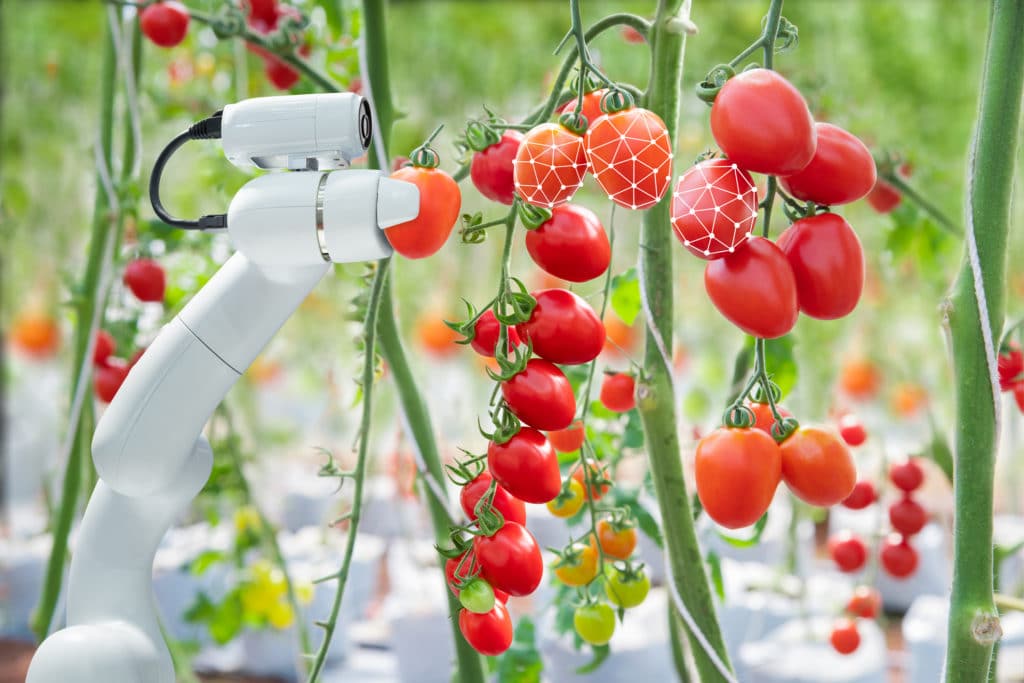 Robot farmers are changing how humans grow food. The question is: will they merely make agriculture more efficient … or displace their human overlords completely?

Of course, technology has always had a place on the farm. Starting with the wheel and hoe and moving to the harvest combine and rototiller, humankind sought to make it easier to extract food from the soil.

Farmers are always looking for ways to increase yield and decrease costs. Efficiency is the name of the game, no matter if you’re talking beets or barley. We first started making tools to better move earth or gather a crop; now we’re making better machines to do the same.

In the last few years, these innovations have expanded to include robotic solutions.

The Rise of the Tractors

Today’s tractor is a pretty sophisticated piece of machinery, with GPS guidance systems, air-conditioned and heated cabs, even on-board entertainment. But someone still needs to be at the wheel while the machine does its work.

However, in the last couple of years, companies have been experimenting with autonomous driving tractors. No need sit on one of these big guys — in fact, they rarely even have cabs or seats.

“Everything from start to finish — including sowing, fertilizing, collecting samples and harvesting — has been done by autonomous vehicles on the farm, according to the researchers,” writes Tereza Pultarova at Live Science. “The scientists said that the robotic technology could enable future farmers to more precisely distribute fertilizers and herbicides, but could also lead to improvements in soil quality. Currently, to achieve all the required tasks in a reasonable amount of time, farmers rely on very large and heavy machines. In the future, they could use flocks of smaller robotic tractors and harvesters, the researchers said.”

Here’s how many U.S. jobs depend on agriculture. (Hint: it’s more than you think.)

“According to Goldman Sachs, a fleet of smaller automated tractors could lift farmer revenue by more than 10 percent and reduce farm labor costs,” writes Jeff Daniels at CNBC. “Globally, Goldman estimates that advances in ag technology — including such things as autonomous ag vehicles, farm robots, drones, as well as precision in planting, fertilizing and irrigation — could result in farm yields potentially rising by more than 70 percent by the year 2050.”

But robotic drivers at the helm of your tractor isn’t just an easy way for farmers to take a futuristic nap, George Jetson-style. Farmers and manufacturers alike are looking for every chance to boost crop yields.

The upsides to autonomous machinery in the field include:

How Robot Farmers Keep Greens and Berries in Check

Besides the heavy lifting, robots will soon do the more delicate work of farming — perhaps better than humans can.

Tech can make light work of traditionally hard labor, thanks to high-flying drones and lighter weight tractors. But can they pick a ripe tomato or strawberry or microgreen? They will soon!

“Developing technology capable of delicate harvest work, like picking fruit from trees or vegetables such as tomatoes, is where high-tech farms will really shine,” writes Meghan Brown at Engineering.com. “Engineers are working to create the right robotic components for these sophisticated tasks, such as Panasonic’s tomato-picking robot which incorporates sophisticated cameras and algorithms to identify a tomato’s color, shape and location to determine its ripeness.”

In the greenhouse, hydroponic farmers are leveraging tech to rotate sprouts for the best possible light and wind exposure. Tedious tasks like planting seeds or watering tray upon tray of vegetables can be done with robots with greater efficiency and no Homer Simpson slip-ups. The robot farm is moving indoors where weather is controlled and the plants can grow in larger numbers.

If you’re interested in a future farming job, you might want to learn how to code just as much as you learn how to tune up a tractor.

“Unlike their forebears, whose time was mostly taken up by heavy labor, the farmers of the future will spend their time performing tasks such as repairing machinery, debugging robot coding, analyzing data and planning farm operations,” Brown writes.

Why some young workers are leaving white-color jobs for farming.

Lowering the Costs of Farming

To feed a growing population of humans, robots (and their efficient ways) can help make yields higher with less cost to the farmer. Luke Fater profiled one such indoor robot-run farm for Atlas Obscura just this past summer. The operation runs inside, night and day, with no pesticides and no dirt.

“Angus, a half-ton aluminum porter, roams the ‘field’ of trays, or pallets, 24/7 with an overhead camera,” writes Fater. “Angus carries the 800-pound pallets in need of rearranging to a separate, industrial robotic arm that gently re-shuffles the growing pods into new compact rows. Angus is also responsible for IPM (integrated pest management) and scanning for aphids, mildew, and browning.”

Indoor farming is practical, but does require a lot of labor to monitor problems and move plants around. As in many other industries, labor costs are some of the most expensive aspects to indoor farming, even though it does produce higher yields per acre in terms of crops.

“Jake Counne of Backyard Fresh Farms, a similarly autonomously assisted farm in Chicago, told the Chicago Tribune that employing robotics reduced his labor costs by 80 percent,” notes Fater. “For this reason, building a farm around robotics and A.I. could crack the code of making indoor farms feasible.”

For now, Angus the robot is “learning” more about what a struggling plant under its care looks like, using its robotic “eye.” That definitely is interesting science at work, and not at all creepy.

How the Internet of Things (IoT) Helps Down on the Farm

What is the Internet of Things? IoT is a bit of a buzzword, but it boils down this: everyday objects able to send and receive data via the internet. We see it all the time in the voice-response devices like Amazon’s Alexa, the Apple watch, or the Nest thermostat. This tech is also helpful in agriculture, and not just so that the robot farmers can listen to their smooth jazz playlists while they rotate plants.

“Just about every aspect of farming can benefit from technological advancements—from planting and watering to crop health and harvesting,” writes Brown. “Most of the current and impending agricultural technologies fall into three categories that are expected to become the pillars of the smart farm: autonomous robots, drones or UAVs, and sensors and the Internet of Things (IoT).”

IoT helps human farmers use all that data to make educated choices for the best possible harvest. It might take details on soil conditions (dryness, nutrient levels, etc.) and combine that information with data on which plants aren’t thriving in the field. This technology can then suggest tests for harmful infestations and suggest possible corrective measures.

While this futuristic vision farming is becoming a reality rather quickly, the human farmer isn’t going away overnight. However, the more routine tasks of agriculture may eventually fall to robot farm workers — something for the people in this occupation to keep an eye on.

TELL US WHAT YOU THINK

What are your thoughts about robot farmers? We want to hear from you. Share your insight in the comments or join the conversation on Twitter.